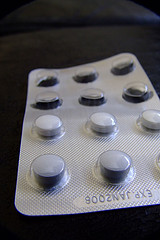 Coated tablets are defined as tablets covered with one or more layers of mixture of various substances such as natural or synthetic resins ,gums ,inactive and insoluble filler, sugar, plasticizer, polyhydric alcohol, waxes, authorized colouring material and some times flavoring material. Coating may also contain active ingredient. Substances used for coating are usually applied as solution or suspension under conditions where vehicle evaporates. The present paper reviews recent advances in different aspects of tablet coating.

The whole 16 pages article is available for download here.

In the process of tablet pressing, it is important that all ingredients be fairly dry, powdered or granular, somewhat uniform in particle size, and freely flowing. Mixed particle sized powders can segregate due to operational vibrations, which can result in tablets with poor drug or active pharmaceutical ingredient (API) content uniformity. Content uniformity ensures that the same API dose is delivered with each tablet. Some APIs may be tableted as pure substances, but this is rarely the case; most formulations include excipients. Normally, an inactive ingredient (excipient) termed a binder is added to help hold the tablet together and give it strength. A wide variety of binders may be used, some common ones including lactose powder, dibasic calcium phosphate, sucrose, corn (maize) starch, microcrystalline cellulose and modified cellulose (for example hydroxymethyl cellulose).

Often, an ingredient is also needed to act as a disintegrant that hydrates readily in water to aid tablet dispersion once swallowed, releasing the API for absorption. Some binders, such as starch and cellulose, are also excellent disintegrants. Small amounts of lubricants are usually added, as well. The most common of these is magnesium stearate; however, other commonly used tablet lubricants include stearic acid (stearin), hydrogenated oil, and sodium stearyl fumarate. These help the tablets, once pressed, to be more easily ejected from the die.

Variations on a common tablet design, which can be told apart by both color and shape. Tablets are easy and convenient to use. They provide an accurately measured dosage in a convenient portable package, and can be designed to protect unstable medications or disguise unpalatable ingredients. Coatings can be coloured or stamped to aid tablet recognition. Manufacturing processes and techniques can provide tablets special properties; for example enteric coatings or sustained release formulations.

Tablets sometimes cannot be used adequately in emergency cases. This is because the rate at which the active ingredient reaches the site to be treated may be too slow. Other routes of administration such as intravenous and intramuscular injections are more effective.

Some drugs may be unsuitable for administration by the oral route. For example protein drugs such as insulin may be denatured by stomach acids. Such drugs cannot be made into tablets. Some drugs may be deactivated by the liver when they are carried there from the gastrointestinal tract by the hepatic portal vein (the "first pass effect") making them unsuitable for oral use. Drugs which can be taken sublingually are absorbed through the oral mucousae, so that they bypass the liver and are less susceptible to the first pass effect. Bioavailability of some drugs may be low due to poor absorption from the gastrointestinal tract. Such drugs may need to be given in very high doses or by injection. For drugs that need to have rapid onset, or that have severe side effects, the oral route may not be suitable. For example Salbutamol, used to treat problems in the pulmonary system, can have effects on the heart and circulation if taken orally; these effects are greatly reduced by inhaling smaller doses direct to the required site of action.

The whole 16 pages article is available for download here.