Development of this pharmaceutical is carried out according to EU-requirements in country without patent protection or with Bolar-provisions. There will be no sales in those countries where this offer would constitute an infringement of third parties intellectual proprietary rights.

The mechanism of action of Quetiapine, as with other drugs having efficacy in the treatment of schizophrenia and acute manic episodes associated with bipolar disorder, is unknown. However, it has been proposed that this drug’s efficacy in schizophrenia is mediated through a combination of dopamine type 2 (D2) and serotonin type 2 (5HT2) antagonism. Antagonism at receptors other than dopamine and 5HT2 with similar receptor affinities may explain some of the other effects of Quetiapine.

Quetiapine antagonism of histamine H1 receptors may explain the somnolence observed with this drug.

Quetiapine antagonism of adrenergic a1 receptors may explain the orthostatic hypotension observed with this drug. 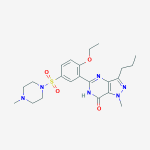