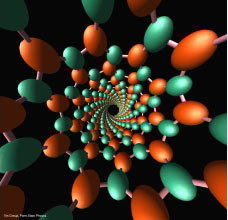 Quantum Dots (QDs) are one of the nanoparticles that use in imaging, recognition and targeting. QDs are nanometer-size luminescent semiconductor crystals and have unique chemical and physical properties due to their size and their highly compact structure. They emit different wavelengths over a broad range of the light spectrum from visible to infrared, depending on their size and chemical composition.

Eventual use of QDs is to dramatically improve clinical diagnostic test for the early detection of cancer. The use of QDs is an indication of revolution in biological imaging. The current and widely used organic fluorophores have two shortcomings associated with their fluorescence. Signals from the labeled molecules can be obscured by cell autofluorescence, occurring in the visible spectrum and by photobleaching which seriously limits observation time. Colloidal QDs are bright, photostable fluorophores of a few nanometers in diameter. Despite their advantages the best materials for QDs; cadmium sulfide, CdS and cadmium selenide, CdSe can be highly toxic. While enhancing the biocompatibility of this nanoparticle various encapsulation techniques have also aided in their water dispersibility and functionalization. QDs were introduced to cell biology as alternative fluorescent probes in recent years.

QDs (QDs) are spherical nano-sized crystals. They can be made of nearly every semiconductor metal (e.g., CdS, CdSe, CdTe, ZnS, PbS), but alloys andother metals (e.g. Au) can also be used [1,2]. The prototypical QD is cadmium selenide (CdSe).QDs range between 2 and 10 nm in diameter (10 to 50 atoms). Generally, QDs consist of a semiconductor core, over coated by a shell (e.g.,ZnS) to improve optical properties, and a cap enabling improved solubility in aqueous buffers.

The traditional lithography based techniques (a combination of electron beam lithography and etching) were used to make QDs in 1980s. However, these QDs are only in the nanometer scale in one dimension. The other two dimensions are limited by the resolution of the lithography. In the early 1990s, QDs were mainly prepared in aqueous solution with added stabilizing agents. This procedure yielded low-quality QDs with poor fluorescence efficiencies and large size variations. From 1993 onwards, the high-temperature organometallic procedure was used for growing QDs [3]. This procedure yields nearly perfect crystal structures and narrow size variations, but the fluorescence is still relatively low. The deposition of a surface- capping layer such as ZnS or CdS was found to dramatically increase the fluorescence properties of CdSe nanocrystals [4]. The resulting QDs are highly hydrophobic and only soluble in nonpolar solvents. The art of QD synthesis is evolving as alternative precursor materials, such as CdO, can be used to prepare high quality CdS, CdSe, and CdTe nanocrystals [5]. In contrast to traditional binary QDs, and core/shell nanocrystals, the QDs synthesized show excellent quantum yields without an inorganic capping layer. The size of the QD can be controlled by temperature (>300°C) and period of time, ranging from minutes to hours depending on the desired particle size [6]. So, it can be summarizes that the QDs are manufactured broadly in two step reaction process in a glass flask.