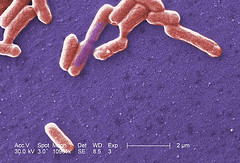 Bacteria are like living paint, covering nearly every surface imaginable and living within a variety of living and nonliving things. An antibiotic is any substance produced by a microorganism, which harms or kills another microorganism. However, antibiotics do not harm viruses. A majority of antibiotic substances are natural products that certain bacteria and fungi produce as a natural defense to send outside their cells.

The whole 9 pages article is available for download here.

Ampicillin is a prescription drug, introduced in 1961, used to treat infections caused by certain bacteria, including the specific bacteria family Enterobacteriaceae. Ampicillin is an antibiotic (drug produced by microbes). It is a semi-synthetic form of penicillin, belonging to the penicillin group of drugs. The present work was conceived to determine if Escherichia coli has the ability to become resistant to the antibiotic ampicillin and if yes, conclude the amount of time involved and how effective the mutant ability is.

About 90% of antibiotics used today come from bacteria. Although these are all natural, some antibiotics are completely synthetic (made in a laboratory) and some are semi-synthetic (only altered). To determine which antibiotic works best against a specific bacterium, tests are done in laboratories, such as a susceptibility test. On an agar plate a bacterium suspension is spread over the plate. Then small, circular, sterile disks, saturated with an antibiotic are placed on the bacterium covered agar plate. The plate is then incubated. After incubation the zone sizes around each disk are recorded for resistance or not. Where no growth occurred around disk, the bacterium is sensitive. Where growth around the disk occurs, the bacterium is resistant to that certain antibiotic. One of the major problems we face today is that many of the disease-causing bacteria have become resistant to the effects of different antibiotics. This occurs when a (need only be one cell) bacteria population genetically acquires the ability to destroy the antibiotic. This one resistant cell will divide and produce a population that is now no longer harmed by that particular antibiotic. This is a great concern, because certain strains of disease-causing bacteria now have only one antibiotic remaining which will kill them. Due to this concern there are tremendous efforts in finding new natural sources of antibiotics, and or make completely synthetic ones in the laboratory. One of the reasons for the cause of this problem is because of prior, indiscriminate use of antibiotics in human and domestic animal health (usually cattle and pigs).

The whole 9 pages article is available for download here.