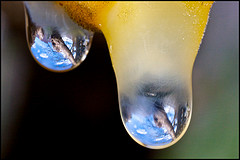 Microsphere technology has been studied extensively for the sustained delivery of therapeutic agents. Microspheres can be manufactured from various natural and synthetic materials. Glass microspheres, polymer microspheres and ceramic microspheres are commercially available. Recent researches are confined to the discovery of active microspheres in the treatment of cancers. The present paper review the recent approaches in microspheres technology, a novel drug delivers system.

The whole 6 pages article is available for download here.

Microscopic, firm spherules which form on the cooling of hot saturated solutions of proteinoids. They were first reported in 1959 by Sidney Fox, K. Harada, and J. Kendrick who proposed that microspheres might represent a significant early stage in precellular evolution. It has been suggested that their greater stability makes them a better proposition in this regard than coacervates. One milligram of proteinoid can yield 100 million microspheres, ranging from 1.4 to about 2.5 microns in diameter. Microspheres have been observed to retain their form for several weeks and, when sectioned, may display a double-walled structure. Recently, Fox argued that microspheres also display characteristics of primitive nerve cells.

The whole 6 pages article is available for download here.