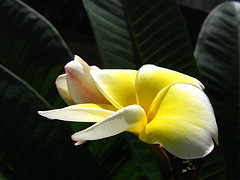 Plant is a biosynthetic laboratory, not only for chemical compounds, but also a multitude of compounds like glycosides, alkaloids, terpenoids, steriods etc. and posses important pharmacological activities used to alleviate different disorders. Herbs are vital source of drugs from the ancient time holding the scenario of the Indian system of medicine.

Plumeria alba Linn. (Apocynaceae) is important herb and widely used in perfumery. The plant is used in different traditional systems of medicine in the treatment of various diseases. The present paper enumerates the Pharmacognostical, morphological and ethnobotanical importance of the herb, which may help the researchers to set their minds for approaching the utility, efficacy and potency of the plant.

India perhaps the largest producer of medicinal herbs and is called Botanical Garden of the World. Medicinal herbs have been in use for thousands of years, in one form (or) another, under the indigenous systems of medicine like Ayurveda, Sidha and Unani. In earth, around 3.6 lakh species of medicinal plants are present, among these 1.4 lakh species are in India (Mehrola, 1990). In the latest survey, it is indicate that about 70000 plants are used in traditional systems of medicines. All over the world, plants were used as main source of medicines by ancestors. The rise of modern western medicine was initially accompanied by a decline in the practice of herbalism in all cultures and it was believed that synthetic chemicals were best medicines to treat illness and cure disease (Mukherjee, 2001).

Madhya Pradesh is well known to harbour a rich wealth of floristic diversity which is used in alleviating suffering among natives. The area is inhabited by number of tribes viz., Gond. Kol, Baiga, Bhil, Panika, Khairwar, Argaria etc. (Jadhav, 2006). They are scattered in deep forests and remote villages and utilized numerous plant species in their day to day life. The workers have made valuable contributions towards the ethnobotanical knowledge of primitive men, tribes and other folk healers of the state1-6. The natural and traditional relationship between human societies and plants has brings to light numerous little or unknown uses of plants (Dwivedi, 2008). Even today the rural and aboriginal folks are very much in harmony with nature and bio resources (Shah & Singh, 1990). During the field studies author have documented some interesting information on Plumeria alba. An obvious advantage of the present study is to create awareness towards the species and enumerate their traditional uses.