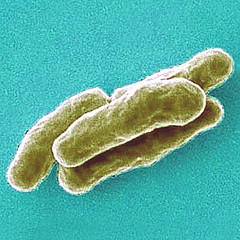 The distribution of tuberculosis is not uniform across the globe; about 80% of the population in many Asian and African countries test positive in tuberculin tests, while only 5-10% of the US population test positive. It is estimated that the US has 25,000 new cases of tuberculosis each year, 40% of which occur in immigrants from countries where tuberculosis is endemic. The World Health Organization (W.H.O.) declared TB a global health emergency in 1993, and the Stop TB Partnership developed a Global Plan to Stop Tuberculosis that aims to save 14 million lives between 2006 and 2015. Since humans are the only host of Mycobacterium tuberculosis, eradication would be possible: a goal that would be helped greatly by an effective vaccine. Standard therapy for pulmonary TB includes isoniazid and rifampin for 6 months along with pyrazidamide for the first 2 months (isoniazid and rifampin without pyrazidamide may be used for 9 months, if necessary). Treatment consists of three drugs that are effective against the organism.

Tuberculosis (TB) is an infection caused by slow-growing bacteria that grow best in areas of the body that have lots of blood and oxygen. That's why it is most often found in the lungs This is called pulmonary TB. But TB can also spread to other parts of the body, which is called extrapulmonary TB. Treatment is often a success, but it is a long process. It takes about 6 to 9 months to treat TB.In 1993, the World Health Organization (WHO) declared tuberculosis a global emergency. According to the WHO, worldwide incidence of tuberculosis (TB) may have peaked in 2005. Tuberculosis infection is responsible for more deaths than any other infectious disease. Once called consumption, TB is a highly contagious, persistent disease characterized by the formation of hard grayish nodules, or tubercles. The disease is most often caused by the bacterium Mycobacterium tuberculosis and usually occurs in the lungs (the initial site of infection), but it also can occur in other organs. Between two to eight weeks after being infected with M. tuberculosis, a person's immune system responds to the tuberculosis germ by walling off infected cells. From then on the body maintains a standoff with the infection, sometimes for years. Most people undergo complete healing of their initial infection, and the bacteria eventually die off. A positive tuberculosis skin test, and old scars on a chest x-ray, may provide the only evidence of the infection.

If, however, the body's resistance is low because of aging, infections such as HIV, malnutrition, or other reasons, the bacteria may break out of hiding and cause active tuberculosis. Because its signs and symptoms are easily confused with those of many other (usually respiratory) diseases, tuberculosis can be difficult to diagnose. Common symptoms are cough that is worse in the morning and may include hemoptysis (i.e., blood in the sputum), chest pain, night sweats, and breathlessness (dyspnea). Ninety percent of those infected with M. tuberculosis mount an effective immune response and never develop the disease. The reason for treating a patient with asymptomatic tuberculosis infection is that there is a 5% risk for developing TB during the first year after infection and an additional 5% risk for developing TB over a lifetime. Also, treatment of asymptomatic TB infection is much simpler than treating tuberculosis. Treatment lasts 6 months in an adult without HIV, 12 months in an adult with HIV, and 9 months in children. This drug has side effects. This is the second most commonly used drug. Generally, the course of therapy with rifampin is 6 to 12 months. If a patient has been exposed to multidrug-resistant Mycobacterium tuberulosis, individualization of drug therapy is required.

Side effects have been noted with this drug. With appropriate antibiotic treatment, tuberculosis can be cured in more than nine out of ten patients. Successful tuberculosis treatment depends on close cooperation between the patient and doctor and other health care workers. Tuberculosis treatment usually combines several different antibiotic drugs which are given for at least six months, sometimes for as long as 12 months. Patients must take their medicine on time every day for the 6 to 12 months. Some tuberculosis patients stop taking their prescribed medicines because they may feel better after only a couple of weeks of treatment. Another reason they may stop taking their medicine is because tuberculosis drugs can have unpleasant side effects.