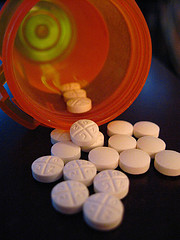 Migraine headaches result from a combination of blood vessel enlargement and the release of chemicals from nerve fibers that coil around these blood vessels. During the headache, an artery enlarges that is located on the outside of the skull just under the skin of the temple (temporal artery).

This causes a release of chemicals that cause inflammation, pain, and further enlargement of the artery. A migraine headache causes the sympathetic nervous system to respond with feelings of nausea, diarrhea, and vomiting. This response also delays the emptying of the stomach into the small intestine (affecting food absorption), decreases blood circulation (leading to cold hands and feet), and increases sensitivity to light and sound.

Migraine treatment (abortive therapies) and prevention (prophylactic therapies) focus on avoiding triggers, controlling symptoms, and taking medicines. Over-the-counter medications such as naproxen, ibuprofen, acetaminophen (paracetamol), and other analgesics like Excedrin (aspirin with caffeine) are often the first abortive therapies to eliminate the headache or substantially reduce pain. Anti-emetics may also be employed to control symptoms such as nausea and vomiting. Serotonin agonists such as sumatriptan may also be prescribed for severe migraines or for migraines that are not responding to the over-the-counter medications. Similarly, some selective serotonin reuptake inhibitors (SSRIs) - antidepressants such as tricyclics - are prescribed to reduce migraine symptoms although they are not approved in all countries for this purpose. Another class of abortive treatments are called ergots, which are usually effective if administered at the first sign of migraine. Other drugs have also been used to treat migraine such as combinations of barbituates, paracetamol or aspirin, and caffeine (Fioricet or Fiorinal) and combinations of acetaminophen, dichloralphenazone, and isometheptene (Amidrine, Duadrin, and Midrin). If vomiting makes drugs difficult to ingest, anti-emetics will be prescribed. Migraine-specific abortive medications usually are necessary for moderate to severe migraine headaches. The abortive medications for moderate or severe migraine headaches are different than OTC analgesics. Instead of relieving pain, they abort headaches by counteracting the cause of the headache, dilation of the temporal arteries. In fact, they cause narrowing of the arteries. Examples of migraine-specific abortive medications are the triptans and ergot preparations.

A migraine headache is a form of vascular headache. Migraine headache is caused by a combination of vasodilatation (enlargement of blood vessels) and the release of chemicals from nerve fibers that coil around the blood vessels. During a migraine attack, the temporal artery enlarges. (The temporal artery is an artery that lies on the outside of the skull just under the skin of the temple.) Enlargement of the temporal artery stretches the nerves that coil around the artery and causes the nerves to release chemicals. The chemicals cause inflammation, pain, and further enlargement of the artery. The increasing enlargement of the artery magnifies the pain.Migraine attacks commonly activate the sympathetic nervous system in the body. The sympathetic nervous system is often thought of as the part of the nervous system that controls primitive responses to stress and pain, the so-called "fight or flight" response. The increased sympathetic nervous activity in the intestine causes nausea, vomiting, and diarrhea.

Sympathetic activity also delays emptying of the stomach into the small intestine and thereby prevents oral medications from entering the intestine and being absorbed. The impaired absorption of oral medications is a common reason for the ineffectiveness of medications taken to treat migraine headaches. The increased sympathetic activity also decreases the circulation of blood, and this leads to pallor of the skin as well as cold hands and feet. The increased sympathetic activity also contributes to the sensitivity to light and sound sensitivity as well as blurred vision. A migraine is a very painful type of headache. People who get migraines often describe the pain as pulsing or throbbing in one area of the head. During migraines, people are very sensitive to light and sound. They may also become nauseated and vomit. Migraine is three times more common in women than in men. Some people can tell when they are about to have a migraine because they see flashing lights or zigzag lines or they temporarily lose their vision. Migraine headaches are usually diagnosed when the symptoms described above are present.

Migraine generally begins in childhood to early adulthood. While migraines can first occur in an individual beyond the age of fifty, advancing age makes other types of headaches more likely. A family history is usually present, suggesting a genetic predisposition in migraine sufferers. In addition to diagnosing migraine from the clinical presentation there is usually an accompanying normal examination.Patients with the first headache ever, worst headache ever, or where there is a significant change in headache or the presence of nervous system symptoms, like visual or hearing or sensory loss, may require additional tests. The tests may include blood testing, brain scanning (either CT or MRI), and a spinal tap. Individuals with occasional mild migraine headaches that do not interfere with daily activities usually medicate themselves with over-the-counter (OTC, non-prescription) pain relievers (analgesics). Many OTC analgesics are available.

OTC analgesics have been shown to be safe and effective for short-term relief of headache (as well as muscle aches, pains, menstrual cramps , and fever) when used according to the instructions on their labels.There are two major classes of OTC analgesics: acetaminophen (Tylenol) and non-steroidal anti-inflammatory drugs (NSAIDs). The two types of NSAIDs are aspirin and non-aspirin. Examples of non-aspirin NSAIDs are ibuprofen (Advil, Nuprin, Motrin IB, and Medipren) and naproxen (Aleve). Some NSAIDs are available by prescription only. Prescription NSAIDs are usually prescribed to treat arthritis and other inflammatory conditions such as bursitis, tendonitis, etc. The difference between OTC and prescription NSAIDs may only be the amount of the active ingredient contained in each pill. For example, OTC naproxen (Aleve) contains 220 mg of naproxen per pill, whereas prescription naproxen (Naprosyn) contains 375 or 500 mg of naproxen per pill.