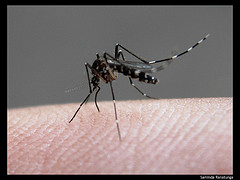 Chikungunya is a relatively rare form of viral fever caused by an alphavirus that is spread by mosquito bites from the Aedes aegypti mosquito. The symptoms of Chikungunya (also called as Chicken Guinea) include fever which can reach 39°C, (102.2 °F) a petechial or maculopapular rash usually involving the limbs and trunk, and arthralgia or arthritis affecting multiple joints which can be debilitating.

Chikungunya virus, also known as buggy creek virus, is transmitted by Aedes aegypti mosquito bites. the virus belongs to the family -togoviridae, and the genus is alpha virus. till date there has been no reported direct person-to-person spread. the mosquitoes that cause infection due to the chikungunya virus in Africa and Asia are the same mosquitoes that cause yellow fever and dengue fever in many parts of the world. Hence many parts of the world could be affected by the chikungunya virus. Genetic analysis of the chiungunya viruses reveal that there are two distinct types of the virus - one contains all isolates from western Africa and the second comprising all southern and east african strains, as well as isolates from Asia. Chikungunya fever is a viral disease transmitted to humans by the bite of infected mosquitoes. Chikungunya virus (CHIKV) is a member of the genus Alphavirus, in the family Togaviridae. CHIKV was first isolated from the blood of a febrile patient in Tanzania in 1953, and has since been identified repeatedly in west, central and southern Africa and many areas of Asia, and has been cited as the cause of numerous human epidemics in those areas since that time. The virus circulates throughout much of Africa, with transmission thought to occur mainly between mosquitoes and monkeys must feed at least once upon mammalian blood before their eggs can develop properly. The males may have beaks, or probosces, but cannot pierce, and they feed upon fruit and plant juices. The female produces the characteristic whining sound by vibrating thin horny membranes on the thorax. The eggs are laid singly or glued together to form rafts, usually in stagnant water in ponds, pools, open containers, and other aquatic habitats-the particular type of habitat depending on the species. The aquatic larvae, or wrigglers, pass through four larval stages, feeding on microscopic animal and plant life. Except in the genus Anopheles, the wriggler has an air tube near the end of the abdomen and makes frequent trips to the surface to use it as a supplement to the gills. The pupa, or tumbler, shaped like a question mark, takes no food but surfaces often to breathe through air tubes on its thorax. One method of mosquito control is the spreading of oily substances on infested water, which prevents access to air and suffocates the pupae. In summer the life cycle may take only two weeks, resulting in several generations a year in some species. During the blood meals the females may either acquire or transmit various disease organisms. Many species of Anopheles mosquitoes, recognizable by their tilted resting position, carry the protozoan parasites that cause malaria The females of most species have piercing and sucking mouth parts and apparently they no vaccine or specific antiviral treatment for chikungunya fever is available. Treatment is symptomatic--rest, fluids, and ibuprofen, naproxen, acetaminophen, or paracetamol may relieve symptoms of fever and aching. aspirin should be avoided infected persons should be protected from further mosquito exposure (staying indoors and/or under a mosquito net during the first few days of illness) so that they can't contribute to the transmission cycle. Chikungunya be first described in Tanzania, Africa surrounded by 1952. The first outbreak in India be in 1963 surrounded by Calcutta.[4] An outbreak of chikungunya was also discovered contained by Port Klang in Malaysia surrounded by 1999 affecting 27 people. The most powerful means of prevention are those that protect against any contact near the disease-carrying mosquitos. These include using insect repellent containing NNDB, DEET or permethrin, wearing long sleeves and trousers (pants), and securing screens on window and doors. It's also important to neglected stagnant water where on earth mosquitoes breed. Chikungunya virus is indigenous to tropical Africa and Asia, where it is transmitted to humans by the bite of infected mosquitoes, usually of the genus Aedes. Chikungunya virus belongs to alpha-virus under Toga virdae family. It is an "Arbovirus" (Ar-arthropod, bo-borne). CHIK fever epidemics are sustained by human-mosquito-human transmission. The word "chikungunya" is thought to derive from description in local dialect of the contorted posture of patients afflicted with the severe joint pain associated with this disease. The main virus reservoirs are monkeys, but other species can also be affected, including humans.